There’s a generations-long tradition in the Ries clan: fun and games. It started with Ken Ries working in his father’s business, Ries Amusement. Ries Amusement started in Denison, Iowa with just a jukebox shortly after the Great Depression and grew into the coin-operated business that spread through central Iowa. Ries Amusement is still operating today and continues to be family owned. 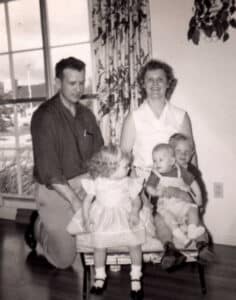 Ken and Dee Ries founded KD Amusement back in 1959. If you’ve ever been curious what the initials meant; that’s where “KD” comes from. They started their business out of their two-bedroom home until they outgrew their space. There was originally two separate businesses. There was KD Amusement, which supplied machines on location to restaurants, bars, and other businesses and there was KD Billiard and Dart Supply which was the retail side which offered accessories and supplies for personal use. Now, they’ve been combined under the umbrella name KD Game Room Supply.

After Ken Ries retired, the legacy continued as his eldest son Ron Ries took over as owner and operator of KD. He continues to provide high-quality new and used gameroom items and his team helps bring old machines back to life. He has even expanded the business into ATMs and gameroom rentals. Each of Ken and Dee’s kids have worked in the business at one point in time as they passed down a love for working on games and machines. Down in Kansas City, Ron’s brothers John Ries owns and operate ThirdGen Amusement and Tom Ries owns The Playtime Company. 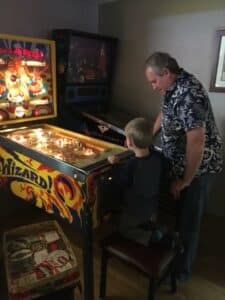 Ken and Dee’s grandkids are often found dabbling in fixing up pinball machines and jukeboxes. Even the great grandkids love visiting KD Game Room Supply and playing the games. Maybe one day they’ll be the ones greeting new customers as the tradition carries on. The love for tinkering has allowed for Ron and his family to create a memorable experience for your family.

From kids gathering around jukebox machines during the 1950s to the golden age of arcades in the 1980s, each generation has left its mark on amusement and gaming while KD has been there to bring joy across Ames and beyond. KD Game Room Supply has evolved and is now your go to place for all of your game room needs, but it still shares the same staples of jukeboxes, pinball, billiards, and darts.

When you’re looking for people who restore and repair machines, it makes sense to work with a family that was operating when many of these machines were still considered new. We’re still family owned and operated to this day. At KD Game Room Supply, we plan to still be “bringing the fun” for generations to come.