With Halloween upon us, we’re focusing this month’s blog post on spooky pinball machines. We picked some of our very favorites. Here are both classic and modern pinball machines we enjoy that are great choices for a frighteningly good time for all ages.

Based on the movie adaptation starring Keanu Reeves, Anthony Hopkins, and Winona Ryder, this 1993 game has its fair share of fans. The Mist multiball uses a magnet which was groundbreaking at the time. The Coffin on the playfield has a ball locking mechanism which starts Coffin multiball. You can also stack the Castle multiball onto the others for even higher scores. If you’re a vampire fan, you should definitely check this one out.

The Creature from the Black Lagoon

Another classic horror character is the star attraction in this Bally pinball machine. This machine takes an interesting format as the game follows a young couple going to a 1950s drive-in to watch The Creature from the Black Lagoon movie and they get more than they bargained for. It’s known for the 3D holographic image that appears on the playfield once you spell out the word “FILM” to get the movie to begin playing. Most of the game features are based on the movie drive in experience itself such as parking, the snack bar, and actually getting the movie to start. It’s a game that has many modes and ways to play, so this one has a lot of replay value.

There are other pinball machines featuring classic movie monsters if you want to grow your collection. Sega Pinball created Mary Shelley’s Frankenstein, from the movie adaptation starring Robert DeNiro as the Creature. This game is more rare than some of the others on this list with only 3,000 being produced. It has the distinction of allowing the player to select the music: either the soundtrack from the movie itself or Frankenstein by Edgar Winter.

Why not have all of the classic movie monsters all in one game? That’s what Williams did in the 1998 “Monster Bash.” The Mummy, Frankenstein, the Bride, Dracula, and the Wolfman are all members of a rock band and the objectives are to unlock each member of the band (and their instrument) so they can perform. Monster Bash got an update in 2018 from Chicago Gaming Company that includes interactive lighting, display and sound upgrades, and even improved playfield monsters. This one is a fun one for every age and has its share of challenges while still being entertaining for newbies.

The classic show got a facelift from Stern in 2019 and has made for a popular game with throwback clips from the actual show with modern game features such as a Zap button to save your ball and a high-speed staircase ramp. There are three editions: Pro, Premium, and Limited Edition, all with their own unique backglass and cabinet art. Each version includes a sculpted Herman and the Drag-U-La toy car on the playfield. This machine is fun to play and is visually compelling; The Munsters machine will look great in your game room as a conversation piece.

In movies and shows, this horror family has had multiple incarnations, but the two movies with Raul Julia and Anjelica Huston are the inspiration for this machine that. This Bally pinball machine is known for being the best-selling pinball machines of all time at over 20,000 units. It is a fast-paced game with four flippers as you explore the Addams Family manor with many advanced shots and innovative features for 1991 when the game was produced. Will they bring this machine back or upgrade/remake it for the Netflix show with Luis Guzman and Catherine Zeta-Jones? This will be interesting to keep an eye on in the future. 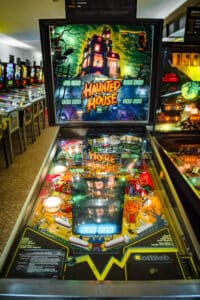 Haunted House by Gottlieb from 1982 is an early solid state game and with a production run of over 6,800 units. It can still be found in private collections and for sale. What’s notable about ‘Haunted House’ was it was the first pinball machine to have three different playfields: the basement and attic were separate playfields you would unlock and try to keep the ball playing to rack up more points If you like unique multi-field games, this one is a great addition to your collection.

There are so many other horror themed games, we couldn’t even begin to list them all as they make a large proportion of the market through the decades. Do you have a favorite not listed here? Let us know! And if you’re interested in adding some frightening favorites to your home game room, check what we have in stock here.