Arcades were a staple in 80’s movies and often showed the attitude at the time — that kids were rebellious or wasting time and being lazy by hanging out in arcades all day. But it never stopped pinball, arcades, jukeboxes, and other games from capturing our cultural imagination. We chose both classics and some modern movies that would make a fun watch either for the first time or revisit after a fun outing at the arcade.

Would a list about jukeboxes be complete without a nod to Happy Days? Happy Days was turned into a series after a growing trend in 1950s nostalgia and the success of the musical Grease and American Graffiti, also starring Ron Howard. Arnold’s Drive-In contained a 1953 Seeburg Model G jukebox that became an iconic part of the show. Just don’t hit the side of yours to make it work, you’re not “the Fonz!” 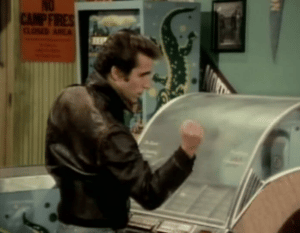 WARNING: Some spoilers ahead if you haven’t watched this one yet.

This entry to the Marvel Cinematic Universe is a fun thriller with a memorable 90’s soundtrack and it featured the appropriately themed Space Invaders pinball machine that was on the space station where the remaining Skrull are hiding. Luckily for us, we don’t have to play the same pinball machine for six years.

Elvira: Mistress of the Dark

Everyone’s favorite horror anthology host had her own movie — Elvira: Mistress of the Dark. If you’re a pinball junkie, you’re probably familiar with the classic machines that were inspired by the show: Elvira and the Party Monsters and Scared Stiff. They were so popular, Stern put out a modern machine Elvira’s House of Horrors in 2019. But the Elvira movie contained a different pinball machine altogether. It included a scene with three pinball machines with one that’s recognizable: the 1973 Bally machine Circus. While not the creepiness we’ve come to expect from Elvira, if you have a fear of clowns it can give you the case of the heebie jeebies.

Back to the Future

There were a lot of 80’s movies that had scenes or took place in arcades, but this 80’s classic had a few different types of jukeboxes. In Lou’s Diner, there was a Wurlitzer 1015 and a Seeburg Wall-o-matic 100 featured. This was the location for pivotal scenes where George asked out Lorraine and Biff and Marty get into a scuffle that ends with Biff getting punched in the face shown below. There’s a movie rumor that there’s a brief scene where Eric Stoltz, who was originally going to be Marty, is shown as the punch scene wasn’t fully reshot. What do you think? Personally, we don’t see it but who knows?

This one doesn’t have any specific pinball machines, but it’s a family movie that is chock full of arcade and video game references. It’s a must when discussing the impact of how games have influenced and become such an integral part of our media and pop culture. While the majority of this movie takes place in the virtual worlds of the video games, the arcade has so many throwbacks to classic arcade games that serve as fun reminders for the adults in the audience. Can you name them and find them all? You can make it a game to see who can find and list the most in a group rewatch.

Olivia Newton-John was such a talented entertainer who unfortunately passed away recently. One of her most well-known movies was the roller disco musical Xanadu. Many fans would say that this movie wasn’t given its proper due when it came out and in many ways was ahead of its time with bright colors and futuristic special effects. Gene Kelly is a dancing legend and is seen dancing on a blown up version of a playfield in an older electromechanical pinball machine. Flippers and bumpers are seen that add to the ethereal and whimsical quality of the dance number. Even when older, Gene Kelly showed that he still had the gracefulness and dance moves of the actors decades younger than him.

There’s So Many More

There are so many other movies, we couldn’t even hope to list them all. Do you have any favorites that weren’t mentioned? You can also use this list and your picks for a personal watchlist for a fun and cozy night inside as the days get cooler.

Interested in some of the pinball machines featured? Or are you looking to see the newest movie and TV show-inspired machines? Check out our current availability to see if you can add yours to your game room.