You have heard of prohibition when alcohol was outlawed, but what about the prohibition of pinball? For decades in the United States, you would have committed a crime by playing a pinball game. 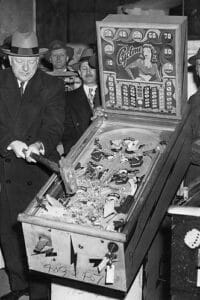 Flippers are iconic to the game. They’re the first thing you think about when you hear ‘pinball.’ So it’s surprising that there were no flippers on the first pinball machines during the 1930s. Pinball machines were seen as a form of gambling as there was no way for a player to be able to influence where the ball ended up. The gambling aspect attracted organized crime, which was alarming to the public and local New York City leaders. The non-gambling pinball machines were still met with suspicion. Pinball was seen as leading to juvenile delinquency and wasting kids’ time and money by overly concerned parents and community members.

After the attack on Pearl Harbor and America’s entrance into World War II, prominent anti-pinball Mayor of NYC Fiorella LaGuardia saw a chance to mobilize people against pinball. He claimed that the machines were a waste of precious resources that could go toward the war effort. He garnered enough support that on January 21, 1942, Mayor LaGuardia banned pinball in New York City. Other major cities such as Chicago and Los Angeles followed suit and other areas put restrictions on pinball machines.

Flippers were invented for pinball in 1947 and it became the game of reflexes and skill we know today. The pinball ban lasted for three decades. Culturally, the game became associated with teenage rebellion and loose morals. In the 1970s, these bans began to be challenged. A ban in Los Angeles was challenged and went all of the way to the California Supreme Court. The NYC ban on pinball was challenged in 1976. On both occasions, pinball machines were wheeled into the court for a live demonstration as part of their testimony. 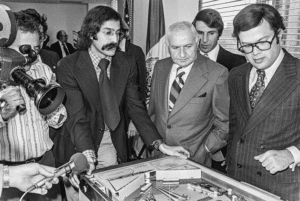 Roger Sharpe, the pinball enthusiast and one of the most skilled in the world at the time, was the witness in the NYC City Council chambers to argue to overturn the ban. Many people, including council members, were skeptical as he played. The stakes were high for Sharpe because he knew that the future of his beloved hobby hinged upon his ability to convince the Council that pinball was a legitimate test of skill. Roger Sharpe ended up calling his shot exactly, pointing to the middle ramp. He tells the audience that if he could make it down the ramp on his next shot, pinball was proven to take skill. He had reduced his entire argument to one shot. He pushed the flipper and in that successful shot emerged victorious.
Pinball was seen as rebellious before but has filtered into our popular culture since. It seems bizarre to think that what we consider a mundane hobby was once a seedy, criminal activity. KD Gameroom Supply isn’t a pinball speakeasy but also has a rich and varied history in the amusement industry, dating back to 1959.